How to sharpen a knife


by Sami P., 11.02.2022
There are often many questions and a little mystery surrounding the sharpening of a knife.

What is the correct angle for sharpening a knife? In what position is the knife held? When do I change sides? How hard do I press the knife?

Knife sharpening is a relatively straightforward process. By experimenting, you learn to find a good way of sharpening your knife to an excellent finish. Remember, there is no one right way in this sport either. On the other hand, there's no rush when sharpening a knife, either, as calmness always leads to a better result.

In this blog, I will not comment on whetstones but rather answer some of the most frequently asked questions over the years. First, I will go through the most common dilemmas that most beginner knife sharpeners encounter.

WHAT IS THE CORRECT SHARPENING ANGLE FOR A KNIFE?

The sharpening angle is the one that raises the most questions in the knife sharpening process. However, I have always tried to answer them, even in the most understated way, because the angle has a much smaller impact on the result than you think. 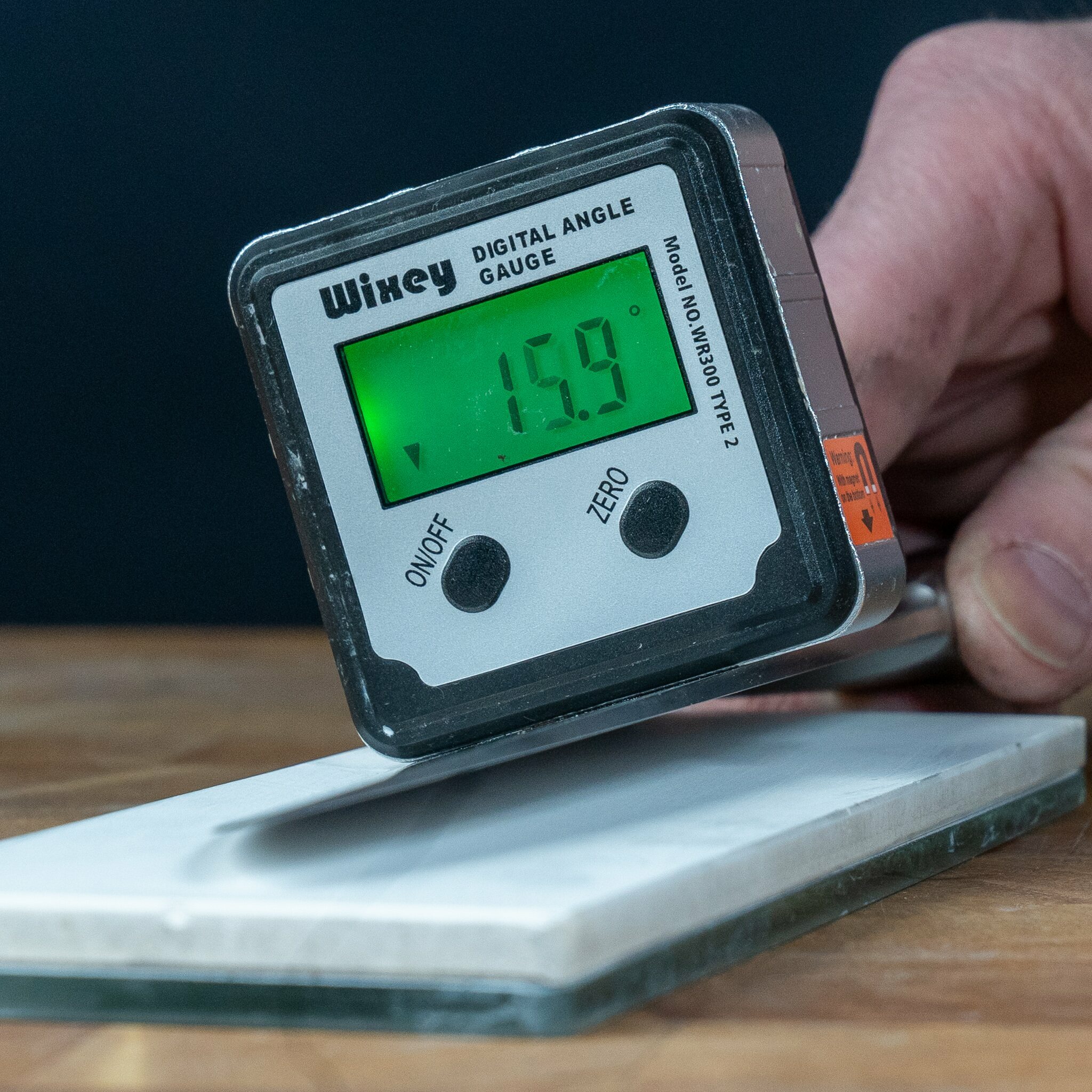 As a general rule of thumb, I can say that you can sharpen a good quality Japanese knife to 10-15 degrees, and no one will be able to tell the difference between the degrees. This is because the profile of a quality knife is already so thin by default that small changes in angle are not noticeable in use. Similarly, if you sharpen a Fiskars knife to an angle of 10 degrees instead of 20+ degrees, every user will notice the difference. The soft metal cannot withstand a lower angle, and the knife feels dull after just a few tomato slices.

How much is that 15 degrees? That's about the same as lifting the edge of a chef's knife 12 mm. That way, you have smoked the correct sharpening angle.

In summary, I would say that quality Japanese knives are sharpened from less than 10 degrees to 15 degrees. Western, higher quality knives with a hardness of HRC 58 should be sharpened to an angle of 15 degrees, and softer knives like Fiskars and Sanelli to about 20 degrees.


WHAT IS A GOOD KNIFE SHARPENING POSITION?

Even beginner sharpeners should look for a sharpening position that suits them. The style doesn't matter as long as your shoulders are relaxed and your hands can move freely. I have sharpened knives sitting down, but I prefer standing in front of a workbench at the right height.

I use a whetstone holder that lifts the stone off the table. This gives your hands more room to work. The stand is handy in the early stages of learning, as it makes it easy to rotate the stone to a position that suits you. This is particularly useful when sharpening the edge of the knife on the side of the weaker hand.

The knife itself can be moved on the stone either lengthwise or crosswise. The direction has little effect on the power. The important thing is that the stone is flat. World is full of whetstones worn to a pitted surface, so remember to smooth the stones before you start sharpening.

DO YOU NEED TO PUSH OR PULL THE KNIFE - AND HOW HARD?

There are many questions about the knife sharpening technique, for which clear instructions are difficult to give. In short, the only way to learn how to sharpen a knife effectively is by trial and error.

A common mistake made by many beginners is to handle the knife too gently and carefully. If the knife has become dull and you need to get the angels right, you should get the most out of the whetstone.

As a basic rule of thumb, the coarser the stone, the more pressure you apply to the knife. This means that you have to press the knife against the stone.

I have also been asked how many kilos of pressure to apply, but it isn't easy to give an unambiguous answer. A lot depends on the knife being sharpened and the stone being used. So you apply as much pressure as you feel comfortable with. Too light grips require a longer sharpening. You also learn the proper pressure by trial and error - you will eventually get a good feel for it.

Right off the bat, it should also be remembered that the finer the stone, the lighter your grip should be. Mistakes become more pronounced as you move into finer stones, and if your sharpening technique is not yet perfected, mistakes are more likely to occur with finer stones. This is a fairly common problem, as a knife can be sharp on a 1,000-grade stone but dull on a stone in the 3,000 range.

Often the root cause of problems is that the angle of the knife changes at the moment of the overlapping trajectory, i.e., when the knife comes off the stone at the end of the trajectory. Even a tiny change in angle causes a wobbling motion that blunts the blade.

So which direction should you move the knife in to make the sharpening as efficient as possible? I like to say: sharpen in the opposite direction for efficient sharpening. The movement can go away, or the knife can come towards you. The important thing is to apply pressure to the blade to extract the grinding power from the stone.

HOW LONG DO YOU SHARPEN ONE SIDE OF THE BLADE?

When knives - and especially quality knives - are sharpened, there is talk of a twist or 'burr.' This means that the metal folds to the opposite side of the knife and is often felt on the nail when trying it out.

Sharpening a knife is removing the burr. The aim is to get the blade so that the burr is removed and all the metal hairs are in the center of the ultrathin core of the blade.

The burr - and whether the burr is created - depends on both the quality of the metal and the sharpening method.

It is a surprisingly common misconception that one side of the blade should be sharpened all the way through and only then start working on the other side. I have never adopted this style, as there is a very high risk of the thread snapping.

One of the most famous knives where the thread breaks easily are Victorinox. The breakage takes away a good blade that has just been created and, in the worst case, can be seen as a bump even to the naked eye. My recommendation is to sharpen both sides of the knife evenly - for example, 20 seconds on one side and then another 20 seconds on the other side. In the best-case scenario, even sharpening will result in the twist you feel on your nail not forming correctly.

Sharpening is essentially a technical sport. It is also essential to understand how to get the most out of the stones.

The amount of water used has a significant impact on the sharpening process, and different grinding stones require different amounts of water. Some stones only improve their performance when the surface is 'opened up,' and the surface slurry is suitably fluid.

As the stone's surface dries, there is a marked change in the sound of the sharpening process. If the surface slurry of the stone dries quickly, the sharpening performance drops completely. Some stones may also glaze quickly, which can be controlled by using Nagura and increasing the amount of water. 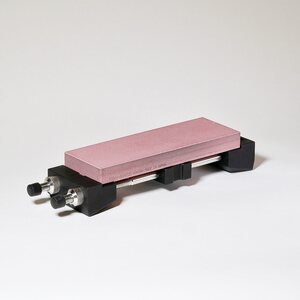 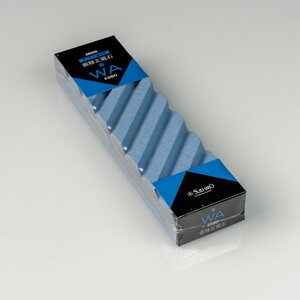 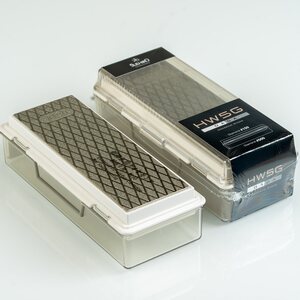 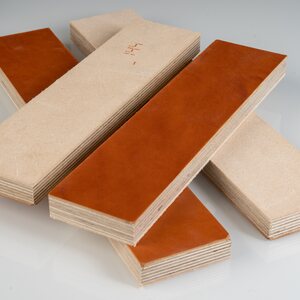